GREEN VALLEY, CA ( Friday, May 31, 2013 at 5 a.m.)—Community reporter Jeff Zimmerman writes: Critical fire weather with hot temperatures with low relative humidity and very steep terrain are hampering fire suppression efforts in San Francisquito Canyon tonight. Both Los Angeles County and the United States Forest Service are now in joint command of the Powerhouse fire near the town of Green Valley. I am not clear as to the cause, whether a structure or power line were involved. However flame lengths and fire behavior today were to say the least very impressive.

Homes in Green Valley have been evacuated and large horse trailers were brought in to evacuate live-stock. Fire weather will be critical through Sunday with a tough day on Saturday, temps hitting triple digits with an offshore flow. Hundreds of firefighters have been brought in to help quell the blaze. Chamise and other chaparral species are at critical levels already and we have not even entered June. Fire behavior today was similar to late October early November blazes when fuels have fully cured. I am not sure if an evacuation shelter has been established. [Zimmerman is a retired U.S.Forest Service firefighter who lives in Neenach. ]

Gunnar Kuepper of Frazier Park reported last night that evacuations for Green Valley were to be lifted at 10 p.m.

Road Closures: San Fransciquito Canyon Road is under a hard closure. Bouquet Canyon Road and Elizabeth Lake Road are under a soft closure open to residents only.

Green Valley, CA ( Thursday, May 30, 2013 at 9 p.m.)—The wind diminished at sunset this evening, slowing the uncontrolled rush of a wildland fire to the outskirts of the small ranching town of Green Valley by 7:30 p.m. This afternoon the small brush fire was whipped into a full-fledged wildland frenzy, consuming over 1,000 acres of sagebrush and trees in a few hours.

“A gigantic plume of smoke could be seen from Frazier Park this afternoon,” said Frazier Park photographer Gunnar Kuepper. The fire is about 10 miles from Neenach, and turning westward as of this evening, he said.

Describing the town, Kuepper said in a phone interview, “It has an intersection with a gas station and general store. Horse trailers are on standby there. It is mostly residential and farming with horse stables. A sign says it has a population of 1,300.”

Kuepper said he saw many houses in the town with cars parked in front—doors and trunks wide-open—as people prepared for a quick escape. Although a ‘mandatory evacuation’ status has been called, adults may not be forced to leave their homes. A road block is in place and those who leave are not allowed to return. Sheriffs are empowered to take children from the dangerous area, Kuepper said, but homeowners may stay if they decide to do so.

Air tankers and helicopters stopped flying at sunset. Ground crews and engines are protecting structures this evening. Ranchers are evacuating horses and other livestock.

High voltage power lines in the San Fracisquito canyon are at risk, and power company monitors are on scene.

The canyon where the fire headed today is the site of the infamous  St. Francis dam disaster. A rupture in the dam engineered by William Mulholland for what is now the Los Angeles Department of Water and Power sent a flood wave crashing through homes in March 1928 in the middle of the night, killing an estimated 600 people—second only to the 1906 San Francisco earthquake and fire as the worst  disaster in California history .

Green Valley, CA (Thursday, May 30, 2013 at 5 p.m.)—A brush fire is reported to have flared up in San Francisquito Canyon in the Green Valley area. It is reported that many residents have evacuated. Animal evacuations are also underway. 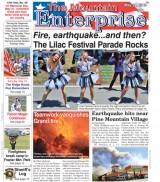 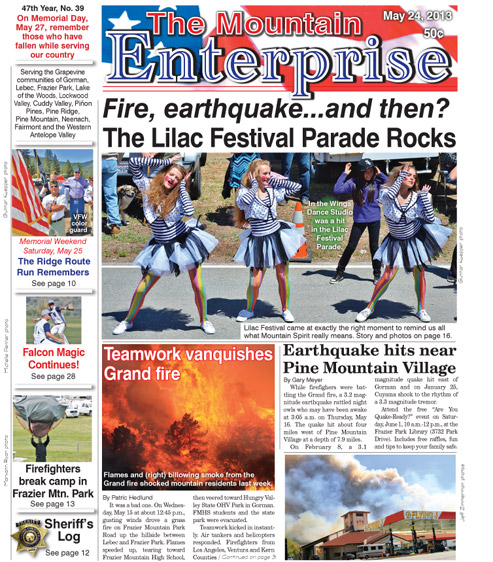