A consultant hired with funding from Centennial Founders, LLC is seeking ways to prop up Gorman Joint School District (GJSD) until the developer can get a green light to proceed with plans to build 23,000 homes and several industrial parks nearby

Gorman Elementary School now has 42 local students. One lives in Gorman, the rest are transfers from El Tejon Unified School District (ETUSD) and Neenach, in the Westside Union School District.

GJSD also supervises the Gorman Learning Center charter school (based in Redlands). It has about 800 home-school students enrolled and was the subject of a state audit that concluded the charter may owe $7.6 million for over-billing the state education fund.

A stern warning to the district board of trustees from the Los Angeles County Office of Education (LACOE) oversight office on November 30, 2007 mentioned ‘lapsation’—a term used to indicate that if the district doesn’t find a way to solve its financial problems, it may be dissolved and its area and assets annexed by an adjoining district— ETUSD or the Westside Union School District in West Lancaster.

Centennial Founders hopes to build its new city east of Interstate 5, along Highway 138, on Tejon Ranch Company land at the northern edge of Los Angeles County—within ten miles of the Gorman district’s office. The developers appear to wish that the Gorman district stay open. Its existence could help support Centennial’s argument to the L.A. County Planning Department that plopping a new city 35 miles from existing infrastructure is a sane idea. If there is no existing school for the children who will begin to move into the 23,000 homes, the argument may become more difficult.

Ed Zemla, a consultant from Whittier, was hired two years ago to help the district plan to accommodate Centennial. Now the challenge is how to keep the district alive until Centennial’s developers win a green light from L.A. County.

Zemla said in an interview September 16 that he bills the district $150 an hour. His contract shows $300,000 is allocated for his services, plus expenses. The cost is to be reimbursed by Centennial Founders.

At the district’s September 9 meeting, the Gorman board decided to hold a special meeting on Tuesday, Sept. 23 at 3 p.m. in the Gorman Elementary School auditorium. Trustees said the meeting would be to consider a proposed remedy introduced by Zemla to help enhance revenue to balance the district’s books. [Editor’s note:  Initially, in the public session September 9, there was mention of the September 23  meeting being a "hearing" regarding that proposal, described below. However, by Friday, Sept. 19, after an urgent letter from Los Angeles County Office of Education on September 11 and questions from The Mountain Enterprise on Monday and Tuesday, Sept. 15-16 about the track record of the individuals involved, the agenda for the September 23 meeting was issued without including the public hearing. Read on for the background.]

Zemla had invited John Hall, an educational entrepreneur who runs a multimillion-dollar complex of charter schools serving about 15,000 at-risk youth throughout the state, to address the Gorman Board on September 9.

Hall made a proposal to help Gorman by bringing two of his learning centers for troubled youth into Gorman School District—a move he says could increase the district’s revenues and help pay for its expenses. By designating Gorman as the host district, additional California education dollars could be routed into Gorman’s bank account. Hall also proposed that one of his for-profit companies could manage the district’s business affairs.

Such a relationship could bring its own complications. A 2006-2007 California Department of Education audit of two of Hall’s programs (Options for Youth and Opportunities for Learning) reported that $57 million may need to be returned to the state. The audit indicated that John Hall and his wife Joan Hall were each paid $310,000 a year in 2003-2004 for work with their chain of charters that served 15,000 students. In comparison to their joint $620,000 salries, It has been reported that Los Angeles Unified School District—with 727,000 students—paid Superintendent Roy Romer $250,000 that same year.

In an interview on September 15, Hall and his public relations representative Stevan Allen told The Mountain Enterprise that an administrative law judge (ALJ) has “overturned half of that case,” and that an appeal on another facet of the audit was scheduled to be heard in October.

Allen produced a copy of the administrative judge’s first conclusion, which is non-binding. The ALJ proposed a decision in favor of Hall’s company regarding their disagreement with the state about the practice of calculating and billing the state for 1.92 full time equivalent (FTE) teachers for each individual teacher when their students are enrolled in year-round independent study programs.

Hall defends his programs: "We are still accredited; all our schools have been approved by WASC (Western Association of Schools and Colleges)." He said that all nine school districts in which Hall’s schools currently operate have re-authorized their charters. The Halls’ programs target youth who have been ejected from regular schools for various problems, including truancy, drugs and disruptive behavior. State law requires that these students still be given public education opportunities. The Halls’ programs have been criticized because (by one assessment) only 11 percent of their students complete their program or secure a diploma from their program.

The Halls continue to operate their charters, as still another administrative law hearing considers a dispute about $7 million in educational materials purchased (the Halls also own a for–profit educational materials supplier). The entire matter will be reviewed by the state’s Education Audit Appeals Panel (EAAP) which will either adopt the administrative law judge’s recommendation as the final decision, or reject it and write its own decision, explained EAAP Staff Counsel Carolyn Pirillo. If either side is dissatisfied, the matter could go to court—which means Hall’s companies could still owe up to $57 million to the state if he loses.

The Tuesday, Sept. 23 public hearing, now apparently canceled, would have been a legally required step in the district’s preparation to take on supervision of Hall’s proposed charter school learning centers. The Gorman board will still hold a special meeting at 3 p.m. to discuss budget issues.

Meanwhile, a state audit is still underway to determine whether the Gorman district will have to return $1.7 million in state funds. The audit of its Gorman Learning Center charter determined that the charter had paid the Gorman district more than allowed by law for its oversight services. In addition, several of the charter’s former employees have now filed claims for what could be hundreds of thousands of dollars against the Gorman district, alleging that paycheck deductions were not deposited into their retirement accounts in a proper and timely manner.

Consultant Zemla, tasked with finding ways to bring additional revenue to the ailing district, was asked about the wisdom of acquiring responsibility for two new charter school operations that may have financial and legal baggage attached: “Any port in a storm,” he said, meaning that the Gorman district’s fiscal crisis is severe, with few other options.

On the wisdom of the district trying to fight lapsation until Centennial is built, L.A. County Office of Education’s Shelton said in an interview Tuesday, Sept. 16, “There were originally optimistic predictions about Centennial—but now I’m not so sure that is going to take place anytime soon.” That comment can be heard as "perhaps not soon enough" by those concerned about the continuation of Gorman’s lovely little elementary school.

This is part of the September 19, 2008 online edition of The Mountain Enterprise. 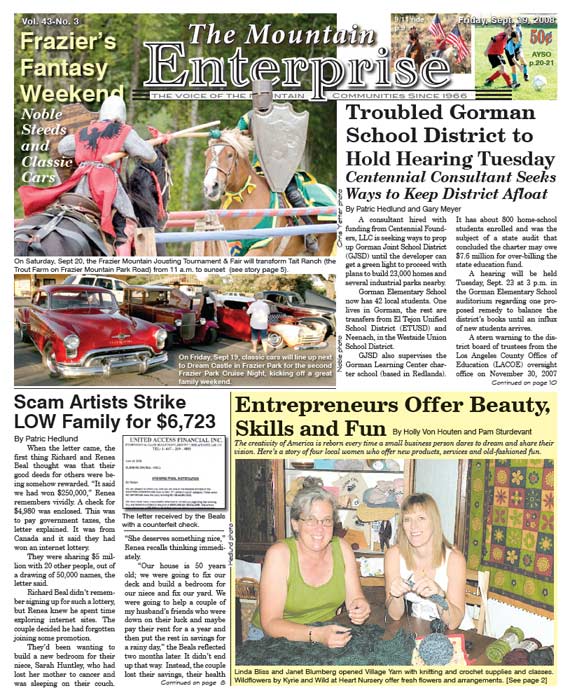