UPDATE: Ridgecrest, CA (Saturday, July 6, 2019 at 6:30  a.m.)—U.S. Geologic Survey reports that 600 aftershocks have occurred in the Ridgecrest area since the 7.1 earthquake hit at 8:10 p.m. Friday evening. As Science Correspondent Jacob Margolis of Pasadena-based KPCC said, “There was 11.2 times more energy released by the magnitude 7.1 than the magnitude 6.4 quake the day before.”
UPDATE: Ridgecrest, CA (Saturday, July 6, 2019 at 1:29  a.m.)—The epicenters of this week’s 7.1 and 6.4 quakes appear to be about 120 miles away from Frazier Park “as the crow flies.” To drive, because of road access, it would be about 141 miles away.
CalTech’s Dr. Lucy Jones—who has been so quick and informative about this week’s earthquakes—has repeatedly warned that the “big bend” section of the San Andreas Fault, where the Frazier Mountain Communities are built, is long overdue for an adjustment, likely to be a major earthquake.
We have closely reported events and information about these quakes onThursday and Friday because they may help us in the Mountain Communities to better understand what occurs in such a major seismic event. We need to prepare.
UPDATE: Ridgecrest, CA (Saturday, July 6, 2019 at 1:03  a.m.)—Seismologist Lucy Jones, Ph.D. said in response to texted questions that here is a 1 in 10 chance that Searles Valley will see another magnitude 7 event. There is a 9 in 10 chance that the area will see a magnitude 6 aftershock.

East and Westbound Highway 178 is now fully open again. In parting, KCFD reminded people that If you feel shaking in the night and are indoors, stay indoors, with your head covered. If you are outdoors, seek to stay away from things that can collapse on top of you, KCFD advised.

UPDATE: Ridgecrest, CA (Friday, July 6, 2019 at 12:45 a.m.)—In a press conference that began before midnight this evening, it was reported that the water system in Ridgecrest is intact and “never breached” according to Kern County Fire Department (KCFD) Chief McLaughlin. He said only minor injuries are reported, “by the grace of God.”
KCFD Battalion Chief Mitchell said that multiple calls were reported of gas leaks and  electrical problems, with structure fires. Air One from KCSO and Helicopter Four of KCFD did aerial reconnaissance quickly to check for infrastructure damage.
Ken Hudnut is the Science Advisor for Risk Reduction for the U. S. Geological Survey.  He explained the San Andreas Fault runs northwest to southeast through the state, “like a big diagonal cut” and “these other cross-fault ruptures are perpendicular to it.”
Typically, Hudnut said, bigger earthquakes are running right laterally like the San Andreas fault. “What is less typical is a left lateral fault system, running against the grain of the main San Andreas fault.” He added that,”now the magnitude 7.1 event was on the main fault, going northwest and southeast along the 178.”
Aftershocks are continuing. With a magnitude 7.1 event, “expect at least one to six magnitude 6.1 or higher aftershocks and ten magnitude 5.1 or higher aftershocks,” Hudnut said.
UPDATE: Ridgecrest, CA (Friday, July 5, 2019 at 11:45 p.m.)— Ceilings at The Ridgecrest Daily Independent newspaper building are reported to have fallen in. But boulders are quickly being cleared from Highway 178 by Caltrans.  Eastbound 178 is opened. Westbound is still closed.

UPDATE: Ridgecrest, CA (Friday, July 5, 2019 at 10:37 p.m.)—SoCal Edison now confirms 2,300 homes are affected by power outages in Ridgecrest tonight. Red Cross evacuation centers are open.The Kerr-McGee Center in Ridgecrest is an evacuation site hosted by the Red Cross. Last night 16 people stayed there. This evening about 100 people are there.

People are still being advised to stay off phone lines to leave them open for life-threatening emergencies.

No deaths have been reported, minor injuries only.
The Ontario Airport is reported to have been evacuated. The 7.1 shock was felt as far south as Mexico, CalTech reports.
UPDATE: Ridgecrest, CA (Friday, July 5, 2019 at 10:19 p.m.)—Landslides in the roads have blocked transportation in some parts of the Ridgecrest – Searles Valley area. Aftershocks are threatening to set additional rocks falling.
Kern County Fire Department Chief David Witt said there are numerous medical aid calls coming in from the earthquake area. Structural fires have occurred, but Witt said KCFD is in full control of the situation.
There are additional gas line ruptures. Damage assessment is taking place at this time.
There is no danger alert for the Mountain Communities. The San  Andreas Fault and the Garlock Fault are not active in this event.
However, in the Mountain Communities, we are advised to have water, food in reserve. Keep sturdy closed-toe shoes near your bed. Have flashlights and batteries, plus first aid supplies available. Also be sure that you are sleeping in an area that is not vulnerable to items falling from shelves, breaking windows or items falling from the walls. You may want to also be sure your cell phones are charged  in case an event were to occur. Advisors ask that we remember the “drop, cover and hold on” drill, covering our heads if an earthquake occurs here.
UPDATE:CalTech, Pasadena, CA (Friday, July 5, 2019 at 9:28 p.m.)—Seismologist Lucy Jones said during a Caltech telecast that “this is unlikely to trigger an additional earthquake outside of the [Ridgecrest/China Lake] area.”
By implication, Jones is saying that it is unlikely that this will trigger an event on the San Andreas Fault (which would impact the Frazier Mountain Communities).
Multiple fires are reported to have broken out in the Ridgecrest area, according to Kern County sources.
More than 1,000 aftershocks have occurred since yesterday, Jones said, leading up to this magnitude 7.1 quake, which is “historic” the seismologists reported in a media briefing opened as a live feed to the public. Such magnitudes were last reported in about 1856 and again in 1999 Jones said, explaining “strikeslip” faults.
“Twenty years with no magnitude 6.0 or larger cannot be  sustained in Southern California,” Jones said, “we need to have these [earthquakes],” because of the motion of the techtonic plates against each other.
UPDATE: Ridgecrest, CA (Friday, July 5, 2019 at 8:32 p.m.)—A magnitude 7.1 rolling earthquake hit Ridgecrest at 8:19  p.m. Friday, July 5, leading seismologist Dr. Lucy Jones to say that yesterday’s massive 6.4 earthquake was actually a foreshock to tonight’s major quake. “A magnitude 7 earthquake has aftershocks for years,” said Jones.
In Pine Mountain Club a prolonged rolling quake was felt at 8:20 p.m. The event was estimated to have lasted almost 30 seconds. It was felt clearly in Los Angeles and Las Vegas.

The epicenter of tonight’s quake was again China Lake / Searles Valley as was yesterday’s—again, 11 miles northeast of Ridgecrest.
“This fault is growing toward the northwest,” said Jones, speaking from Caltech.  A 5.7 earthquake aftershock began at 9:19 p.m. as Caltech seismologists were broadcasting informational updates.
“There is a 5% chance of an even larger quake following this kind of sequence,” Jones said. In Chile in the past there was a series of three earthquakes that increased in severity, she recalled.
UPDATE: Ridgecrest, CA (Thursday, July 4, 2019 at 9:15 p.m.)—Nicole Maul from the American Red Cross confirms a shelter has been opened at the Kerr McGee Community Center at 100 W California Avenue in Ridgecrest in response to today’s earthquake.
“Our volunteers are currently providing comfort and care to several of those who have been affected,” she said.  “We provide safe shelter, warm meals and emotional support. We know that this community is resilient and we are working with local agencies to ensure the immediate needs are met.”

UPDATE: FRAZIER PARK, CA (Thursday, July 4, 2019 at 4:44 p.m.)—Governor Gavin Newsom has proclaimed a state of emergency for the Ridgecrest earthquake, to seek state and federal assistance in repairing infrastructure damaged by the magnitude 6.4 quake that struck 11 miles northeast of Ridgecrest. The epicenter was in the China Lake region.  Numerous aftershocks are continuing. For the full sequence of reports about this event, please read from the 11 a.m. July 4 post at bottom of this page.

As reported earlier, traffic lights are not working in some areas, with 6,700 customers reported by Southern California Edison as being without power. Gas lines are said to be leaking in the area, water lines have snapped, and lines to residential hot water heaters have broken, causing some flooding in homes. The regional medical center is being evacuated, as are some apartment buildings. Roads have cracked and rock slides have occurred, inhibiting transportation. Goods have been shaken off of shelves in stores and residents report major damage to contents of homes in Ridgecrest. There are some limited fires. A Walmart on Bowman Road has been set up as an evacuation center for those who feel their homes are not safe.

Another “strong” quake is being forecast in Ridgecrest within the next few minutes, according to prototype forecasting technology. No additional large quake had occurred by 1:34 p.m.

The region has a population of about 25,000, with vast uninhabited desert areas surrounding the epicenter.

Residents are asked to not use landlines or cell phones to keep lines clear for urgent emergency calls.

UPDATE: FRAZIER PARK, CA (Thursday, July 4, 2019 at 12:10 p.m.)— An all-points bulletin from the Kern County Emergency Communications Center (ECC) alerted firefighters throughout Kern County to remove their engines from their stations immediately. This followed a report from China Lake Naval Air Base that another large earthquake was expected shortly.  Shortly after this alert, at 12.25 and 12:28, a 4.3 and a 4.5 aftershock were reported.

AT THIS TIME we have no reports of damage to the Mountain Communities region. We have only minimal evidence of disturbance in this region, such as Lebec residents who said they felt the rolling motion of the quake and a report of shaking window blinds in Frazier Park. Residents of the Neenach area said they felt the quake but they did not report damage.

FRAZIER PARK, CA (Thursday, July 4, 2019 at 11 A.M.)—Today, at about 10:33 a.m., a magnitude 6.4 quake hit northeast of Ridgecrest in eastern Kern County. A series of aftershocks have continued, ranging from magnitude 4.7, 4.2, 3.8 and 3.5. None of these were on the San Andreas fault, according to USGS, but in the Mojave area which has a series of strikeslips. The epicenter is reported to have been in the China Lake Naval Air Warfare Center test range area.

Seismologist Lucy Jones said another magnitude 5.5 aftershock has a 50-50 chance of striking. By Twitter, she said the area does not have long faults, but a mass of the small strikeslips. In the 1980s, Jones added, the region sustained a series of magnitude 5.0 shakers.

Los Angeles area media report that the magnitude 6.4 quake was felt as far south as Oceanside (in San Diego County). Of interest, L.A. residents reported feeling the shock for 20 seconds. In Riidgecrest, they report the shaking of the main quake took 7 seconds. The disparity may speak to the unstable soils on which much of L.A. is  built.

News reports indicate there were power lines down and roads damaged 10 miles northeast of Ridgecrest, in Trona (west of Death Valley).  Broken water mains and rock slides on roads were also reported in the northwest area of Kern County.  It is reported that there have also been calls for structure fires and medical aid in the Ridgecrest area.

Dr. Lucy Jones reports that this is the largest quake in Southern California since a magnitude 7.1 struck about 20 years ago, 50 miles southeast of Barstow, in October 1999.

A swarm of small earthquakes were measured near Mettler by the U.S. Geological Survey on Tuesday afternoon this week, but Dr. Lucy Jones said the San Andreas Fault was not connected to the slideslip systems NE of Ridgecrest where the magnitude 7.1 hit on Thursday.

This is part of the July 5, 2019 online edition of The Mountain Enterprise. 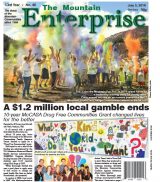 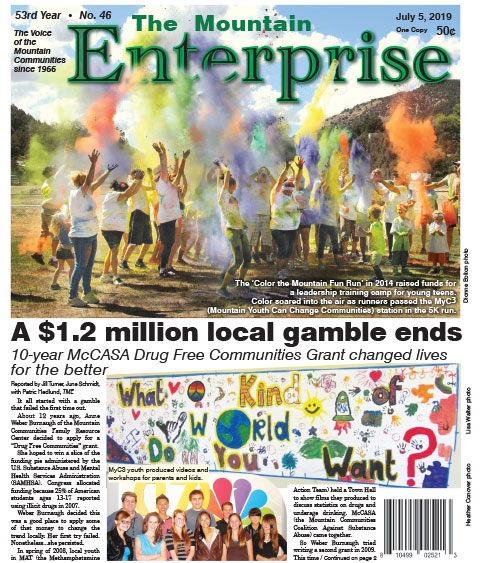