How Kern County’s negotiation snafu with employees’ union led CHP, tow trucks and over 64 vehicles to be trapped in an ice storm –Part Two  (published January 12, 2018)
See Part one (published December 29, 2018) and the Editorial

When the black ice finally started melting from Mil Potrero Highway on December 21, 2017 it was clear that Search and Rescue volunteers and the PMC Community Emergency Response Team (CERT) were the real heroes of the day.

Those two groups of volunteer neighbors rescued about 100 shivering people—from an 18-month-old baby to elders with medical conditions—whose vehicles were stuck on the freezing ‘S’ curves when a sudden ice storm transformed the road into a snake-like sheet of treacherous black ice.

The heroes of the evening got people home safely. But what was being discussed on social media and in the halls of government in Bakersfield throughout the next day was who might be cast as the villains of the event. County officials were quick to point the finger.

“They threw the roads workers under the bus,” said Sonja Bennett, a contract specialist with Kern County for 24 years. She is also regional vice president of Service Employees International Union (SEIU Local 521), and part of the negotiating team for a contract that went into effect on December 19, the day before the Great Mil Potrero Mashup.

“There would be no separate understanding. The board was presented with an MOU [memorandum of understanding] ratified by the union. That is what they approved. I was at the meeting and I didn’t hear any discussion of an effective date. What the board approved on December 19 is what is binding on both parties and whatever effective date is in the document they ratified is the date it began.”
—Mark Nations, Kern County Counsel

The language of the agreement that was approved by the Kern County Board of Supervisors in such a remarkable rush on December 19 said that the agreement would be effective as soon as both parties ratified it.

So the contract was active as soon as Supervisor David Couch and his colleagues hit the ‘Yes’ buttons on their desks.

Kern County Counsel Mark Nations, the county’s attorney, said he was there when the vote was taken.

“I was at the meeting and I didn’t hear any discussion of an effective date. What the board approved on December 19 is what is binding on both parties, and whatever effective date is in the document they ratified is the date it began,” Nations confirmed in an interview on January 11. The language was clear: the MOU was in effect immediately on December 19.

“Due to the time the board takes off during the holidays, the board was pushing for us to come to an agreement quickly,” SEIU’s Sonja Bennett said.

This becomes relevant because it appears Kern County made a bit of a goof in the technicalities of adopting a contract affecting how people are paid when a contract is ratified on a Tuesday in the middle of a pay period. The practical reality, Bennett pointed out, is that it would take days for human resources division programmers to put new labor contract payment rules into the system. That time had not been figured into the equation before making the deal final.

The board did not propose an amendment to change the effective start date before they voted on December 19.

“There would be no separate understanding. The board was presented with an MOU ratified by the union. That is what they approved,” the county counsel confirmed.

In reporting this story, it was striking to see how many workers represented by the union—and their family members—had read and even memorized elements of the contract.

Steven McCullah, supervisor of the eight road yards in the western side of the county knew the contract would actually be retroactive to begin August 2017.

Jessica Carroll knows precisely what is in her husband’s contract, and what isn’t. She is married to Brandon Carroll—the foreman of the Kern County Roads Department yards in Lebec and Taft.

Bennett explains that families are paying such close attention because “it has been eight years since our members have had a cost of living increase. The county, because of the fiscal deficit, says it is not able to offer COLA increases to hourly workers.” That hurts.

It seems the county’s salaried administrative staff may not have been so studious.

On Wednesday, Dec. 20 Kern County Human Resources Director Devin Brown (who did not return our phone call for comment) had to go back to the union to ask for a delay in the effective date of the contract.

The negotiations and coordination for that took all day Wednesday, Bennett reports. It was not until after 4 p.m. December 20, she recalls, that an agreement was reached among the union’s team, and then it had to be transmitted to Brown, which would make the new pay-period start date of December 23 the effective beginning of the contract.

But by that time the work day was over and county workers were not informed there had been an extension of the old overtime structure, Bennett confirms.

Many other things had also occurred that afternoon. For one, Brandon Carroll’s father had a stroke. The foreman of the Lebec and Taft yards had departed on family medical leave to help in the family crisis by 3:30 p.m. Wednesday.

By 3:45 p.m. when the sun was falling behind the mountains on the eve of the shortest day of the year, the Mil Potrero highway into Pine Mountain Club had already transformed into a black ice trap. There was actually no one to answer the phone when CHP sent out its SOS just before 6 p.m. for cinders to be spread on the road.

Administrators were caught flat-footed: “We may not have had as good of a backup plan in place as we should have,” County Communications Director Megan Person said the next day on the Winter Solstice.

Veteran public servant and Department of Roads Director Craig Pope said he spent most the day December 21 in meetings to come up with a solution.

“Now we have a volunteer team lined up if work needs to be done, and if there is any problem,” Pope said, “we have [private] contractors lined up to plow and cinder.”

Supervisor David Couch released a statement saying, “After all the planning for winter traffic safety, I’m disappointed that we stumbled out of the gate.”

The Kern County Board of Supervisor’s “hard and fast” negotiating points had been to fight for the right to contract out services and to impose a new structure for overtime pay. A major change included restricting overtime to strictly “hours worked,” so the eight-hour day no longer counted.

“They didn’t want to start counting overtime until 86 hours had been worked in a two-week period,” Bennett said, “but we pushed back hard on holiday time, then stood firm for 40 hours a week,” she said.

Now the county is seeking to negotiate some kind of “emergency call” pay structure for roads workers, Bennett added.

See our editorial (Broken Government Is Not Good Government)

Of 4,500 members, about 1,300 voted in the SEIU decision on a new contract with Kern County; 75% voted to accept the contract; 25% voted to reject it. Most Roads Department workers voted ‘no.’

The e-Edition is available now with full photos and stories at The Mountain Enterprise e-Edition. Select the 2018-0112 edition.

This is part of the January 12, 2018 online edition of The Mountain Enterprise. 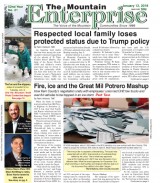 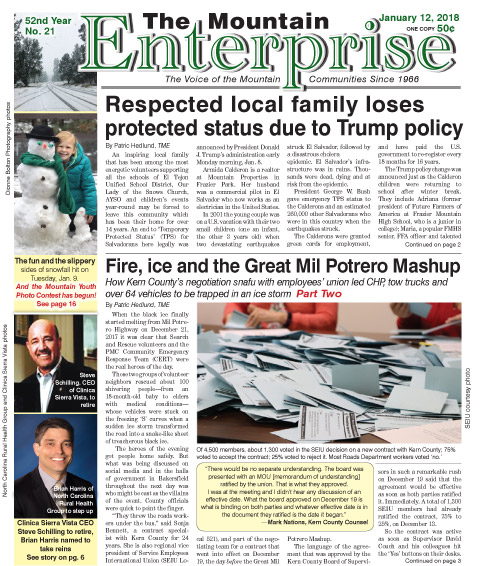