How Kern County’s negotiation snafu with employees’ union SEIU led CHP, tow trucks and over 64 vehicles to be trapped in an ice storm for 15 hours

By Patric Hedlund and Gary Meyer with the TME team—Part One
(Published in two parts: Part One –December 29, 2017 and and Part Two-January 12, 2018) with an editorial

The week before Christmas was still all about watching for the Thomas fire’s progress toward Lockwood Valley. When the sun slipped behind the mountains Wednesday, Dec. 20 at 4 p.m., the wind had calmed, there had been a little rain and a dusting of snow. The fire stopped in its tracks for the first time in 16 days.

For those watching the sky, the signs were good.

But Mother Nature had a surprise in store. The real danger that afternoon turned out not to be fire, but ice.

“Vehicles that did not have traction devices and 4-wheel or all-wheel drive,” Webber said, “were suddenly slipping into each other, and coming to a stop in the roadway. We had multiple calls at once of traffic accidents with icy conditions and multiple vehicles.”

He sent a patrol unit with four wheel drive to help: “My unit got partially down there and was stranded himself.”

That unit radioed they were unable to help.

“My unit [that was] stuck between Mil Potrero ‘Y’ and Yellowstone Drive said there were 50 to 100 vehicles stuck. That was an estimate,” Webber said. He sent out a tow truck.

The tow truck driver called back that he had chains on his wheels and was still slipping off the road. “When I couldn’t get tow trucks down there, we closed the road for safety,” the CHP sergeant said. “I was hoping for cinders, to give traction. Dispatch put out the call [to Kern County Roads], but they were not able to mobilize a crew.”

That comment is a polite way to say that there was no response at all from personnel of Kern County Roads’ Lebec yard. Crickets.

PMC resident Charlie Hall was stuck on the roadway: “I was stopped with my vehicle partially on the roadway, behind lots of other cars. A Ford Expedition came creeping along, passing all the other vehicles, driving on the wrong side of the road.”

Hall wrote in the email interview: “the Ford began sliding into the side of a small car that was stopped ahead of me.”

He said it pushed the car into the guardrail, “damaging both sides of the small car.”

Kern County Sheriff’s Sergeant David Kessler was one of the first to be able to respond successfully: “I got out there around 1700 hours [5 p.m.]. I was the first KCSO unit to arrive. CHP was already at the accident, I learned later. It took me a while to arrive at his location.”

Kessler was in a 4-wheel drive vehicle “with cables on all four tires—and it still made for a slippery ride at times.”

He estimated that maybe 60 cars were stranded and needed help to be rescued: “There were elderly people and children in some of the vehicles.”

Kern County Sheriff’s Sgt. Zack Bittle is Search and Rescue (SAR) coordinator for the county. CHP’s dispatch asked for assistance. Bittle was in Rosamond when he got the call about 7 p.m. He headed immediately to Mil Potrero Highway to begin coordinating a rescue operation and the road closure.

Bittle’s assessment of the conditions at 8:30 p.m. was grim: “It was slippery, super thin, black ice. You couldn’t see it. It was super cold.”

Mike Parker of the SAR team said he arrived about 8:45 p.m.

“There were vehicles off the side of the road, vehicles on the road and there was black ice everywhere,” Parker said.”The first thing we did was inspect the scene from one end to the other to see what we were dealing with, to make sure everyone was okay. The people were okay, just cold. Those in my vehicle ranged in age from 80 years old to an 18-month-old baby.”

Parker put the baby’s seat in his vehicle. A person with diabetes in another SAR vehicle appeared to be stable.

“We took most of the PMC residents to the bottom of the S-curves,” Parker said.

Non-PMC residents were taken to the clubhouse to get warm. PMCPOA General Manager Karin Shulman said one visitor was taken to the Old Bear Bed and Breakfast to sleep in their last available room. Two men stayed at the clubhouse overnight until they could reclaim their vehicles.

“I drove the family with the baby directly to their home on Glacier Drive,” Parker said. “We finished the shuttling by around 1 a.m.”

He estimates SAR made more than 40 trips, with multiple people taken out in each search and rescue vehicle.

“After everyone had been safely ferried out, we took another pass to check every vehicle and make sure no one had been left behind.”

Underlying all these interviews was the discomfort that vital partners in maintaining public safety during snow and ice conditions were absent from the operation.

Kern County Roads workers have always been an essential part of the public safety team for Mountain Community residents.Where were they December 20?

Sgt. Bittle said he wasn’t sure. He said he had heard that they declined to respond due to budget cuts.

Social media in the Mountain Communities lit up about the event. Most recognize it occurred because there were no cinders on the road…and because drivers were not prepared for winter conditions.

“As public resources, we are responsible for public safety,” Bittle said. “Public safety doesn’t stop when the contract stops. We [Kern County Sheriff’s deputies] are also in a contract issue with the county. The sheriff’s office is dramatically understaffed.

“I can’t speak for county roads. I don’t know all the details, I’ve heard bits and pieces. I was surprised, honestly, that that was the response, I’d never heard anything like that before.”

But what really happened?

The Mountain Enterprise spoke with multiple members of the Service Employees International Union (SEIU) negotiation team, checked through the memorandum of understanding, interviewed Roads Department Director Craig Pope and asked the union to convey an invitation for Lebec roads workers to speak for themselves. The story we found is more nuanced than you will find on social media. We’ll report “the rest of the story” in our next regular issue.

“Please remind your readers in big bold letters to carry chains and be prepared for winter!”
[See Winter Driving Tips on page 18 of the print edition].

Message from South Kern Search and Rescue Volunteer Michael Parker:
Southern Kern Search and Rescue members are volunteers who pay for their own gear to go out to help people who become lost, stranded or injured in our mountains. The team operates on donations from community members—like those who are reading this newspaper, for example.

Of 4,500 members, about 1,300 voted in the SEIU decision on a new contract with Kern County; 75% voted to accept the contract; 25% voted to reject it. Most Roads Department workers voted ‘no’.

The e-Edition is available now with full photos and stories at The Mountain Enterprise e-Edition. Select the 2017-1229 edition.

This is part of the January 19, 2018 online edition of The Mountain Enterprise. 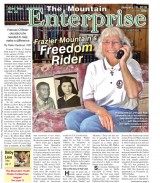 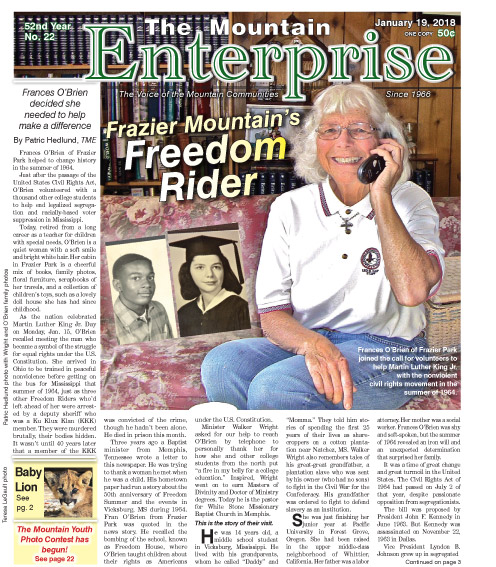