UPDATE—NEENACH / FAIRMONT, CA (Aprl 23, 5 p.m.)—Dire rumors today that workers had been laid off from the 230 MW solar farm project off of 170th West and Highway 138, do not appear factual.

Antelope Valley Solar Ranch One community relations liaison Adam Eventov said at 5 p.m. today that "AVSR1 did not ‘lay off all its workers.’ As of today, AVSR1 has approximately 210 workers on-site. Although during the course of construction the number of workers will ebb and flow based on certain normal project dynamics such as the construction schedule, workload, materials deliveries, etc., work activities are continuing per the project schedule."

Local businesses said they have had no report of layoffs today from workers visiting local stores.

Porter Stansberry wrote that "Maxim Group LLC downgraded the company to a ‘sell,’ saying First Solar’s panels have lost their cost advantage as prices have fallen industry-wide. ‘Though we had reserved hope its project business would prove sustainable, we believe the bull case for First Solar now rests solely on hope, not reality,’ Maxim analyst Aaron Chew said in a note to clients."

First Solar, Inc. said Tuesday, April 17 that they will lay off 30 percent of their workers— as many as 2,000 people worldwide.

Increased supply of photovoltaic (pv) panels coming from China and reduced subsidized demand in Europe are driving the need for America’s largest manufacturer of solar modules to restructure. The stock price for First Solar had dropped from its 52-week high of $145.16 to $21.41 Tuesday morning. Stocks closed up at $22.96 after announcement of the restructuring plan.

Less than 10 percent of the job losses are in the United States. The majority of the layoffs (1,350) will be from the factory and sales force in Frankfurt, Germany, with 550 more dropped in Malaysia.

Locally, the Antelope Valley Solar Ranch One (AVSR1) project in Neenach (at 170th Street West and Highway 138) has been the source of substantial rumblings over the past month. Construction Manager Gary Baumeister was removed and some employees are threatening lawsuits for illegal labor practices.

Others, laid off at the end of 2011 just before New Year’s Eve, were promised they would be called back to their jobs, but have not yet received that call. Kerry Keiser of Frazier Park said he has moved on. Keiser, who has a certification in solar technology, found a position training as a welder in Bakersfield. Some report First Solar is still using out-of-state workers.

The jobs held in the Western Antelope Valley are primarily construction positions, building the utility-scale 230 MW solar farm. The facility, along with its 25-year purchase contract for selling renewable energy output to Pacific Gas & Electric, has been sold to energy company Exelon. Construction and operation of the plant is contracted to First Solar, however, using First Solar’s management and its cadmium telluride panels.

This month a routine inspection by Los Angeles County of the components being installed at AVSR1 led to an order to stop assembly of the pv panels when it was discovered that they are not UL approved. Project spokesperson Adam Eventov said there has been a misunderstanding and that the company is working with the county to smooth out the situation.

In question, it appears, is whether utility-scale facilities behind fences need to adhere to California’s UL-approved standards.

The company abruptly cancelled its monthly briefing with the Oso, Fairmont, Three Points and Antelope Acres Rural Town Councils for April. A flyer urging a picket of the AVSR1 facility on April 18 was circulated by residents.

This is part of the April 20, 2012 online edition of The Mountain Enterprise. 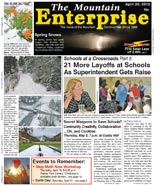 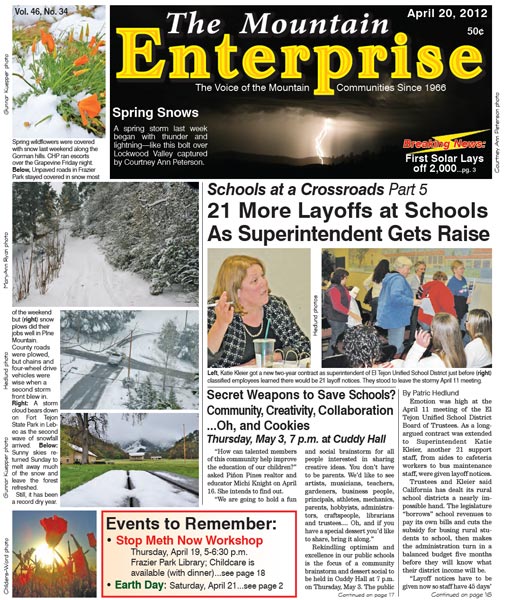