Over 30 motorists slammed into each other on the southbound Grapevine Saturday, March 23. Dense fog between Frazier Park and Gorman suddenly blinded drivers. Fourteen people were evacuated to hospitals, including a 21-month-old boy in critical condition. Three horses being trailered were injured; one of them died.

The first estimate of the number of vehicles in crashes was 60. This was revised to “40-50” by California Highway Patrol, then reported as “a minimum of 30,” in CHP’s news release.

Southbound Interstate 5 was closed just south of Laval Road at about 3:15 p.m. Lebec, Frazier Mountain and Fort Tejon southbound on-ramps were also closed. Traffic in Lebec was diverted to Ralph’s Ranch Road to allow motorists access to the freeway south from Gorman. The Grapevine was closed until traffic and weather conditions cleared at about 6:30 p.m.

Whitney Spicher, a horse trainer from Washington state, was towing a trailer with three horses on board. Spicher, her one-year-old son and her client, Laura, were headed for a competition in Southern California. The trailer was hit from behind.

Los Angeles County Fire Department requested a large-animal veterinarian from Los Angeles, then, one minute later, asked that a vet be sent from Bakersfield.

Doctor Hector Gonzalez, with Bakersfield Large Animal Hospital, headed south, but was stuck in traffic near the Outlets at Tejon.

When Dr. Diane Cosko from Mountain Aire Veterinary Hospital in Lebec heard about the situation, she contacted CHP to have them connect with Dr. Gonzalez so he could be escorted to the scene.

Doctor Cosko, veterinary technician Cat Whitelock and another employee drove to the scene and found that one horse had already died.

Both vets tried to determine via telephone whether there was anything Dr. Cosko could do to help calm the two surviving animals until Dr. Gonzalez could reach them.

Cosko told The Mountain Enterprise that they felt the drugs she had on hand weren’t right for the circumstances, so Whitelock climbed into the trailer and worked to calm the two, “using good old-fashioned TLC.”

Doctor Gonzalez arrived and was able to tranquilize the horses.

When Cuddy Valley residents Shawna and Kieth Cascarelli learned of the accident, they immediately brought a horse trailer to the scene to transport the two surviving horses to Bakersfield Large Animal Hospital for treatment of their injuries.

Kieth helped move the deceased horse to a location for later pickup.

Shawna told The Mountain Enterprise that she is making arrangements with her employer, Equine Trans Network, to take the two surviving horses, Lenny and Ballon, home to Washington state as soon as they are able to travel. Shawna and Kieth are among many more unknown, local residents who stepped forward to help.

News photographer Jeff Zimmerman said he couldn’t see anything through the fog at the crash scene. “I couldn’t even see the freeway from the side of the freeway,” he said.

CHP Public Information Officer Richard Anthes suggests if you encounter fog or a dust storm, focus on what is directly ahead, while adjusting your speed to increase distance between your vehicle and those ahead, to be able to avoid any obstacles you encounter, to keep your car safe, as well as those that may have become stranded due to a prior collision.

“Hazard lights should be activated,” he said, “and I would not recommend stopping or getting out of the car. The safe speed may be 5 to 10 miles per hour depending on the conditions,” Anthes said. He added that continuing through the area will reduce your exposure more than stopping and getting out of the vehicle.

A GoFundMe has been set up to help with the surviving horses.

BREAKING NEWS: Late Thursday night, March 28, we learned that the 21-month-old boy, Aden Poulsen, who was pictured being rushed to a waiting helicopter, passed away late Wednesday night after The Mountain Enterprise had gone to press.

Top: A 21-month-old boy is rushed by Kern County Station 56 Firefighter Bush and Gorman’s AMR paramedic to an L.A. County Fire Dept. helicopter in critical condition for a flight to Northridge Hospital. Above, right: Vehicles were burned and strewn across freeway lanes, including (above, left) a horse trailer with three horses. One was killed; two others were injured.

A dense fog blinded motorists on the Grapevine between Frazier Park and Gorman on Saturday, March 23.

A 21-month-old boy is carried to a helicopter, which had to land five miles to the south at L.A. County Fire Station 77.

The view from Edgar Camacho’s car as he was stopped in traffic at the bottom of the Grapevine on his way to work in Frazier Park.

The e-Edition is available now with full photos and stories at The Mountain Enterprise e-Edition. Select the 2019-0329 edition.

This is part of the March 29, 2019 online edition of The Mountain Enterprise.

Have an opinion on this matter? We’d like to hear from you.

This is part of the March 29, 2019 online edition of The Mountain Enterprise. 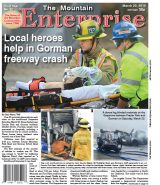 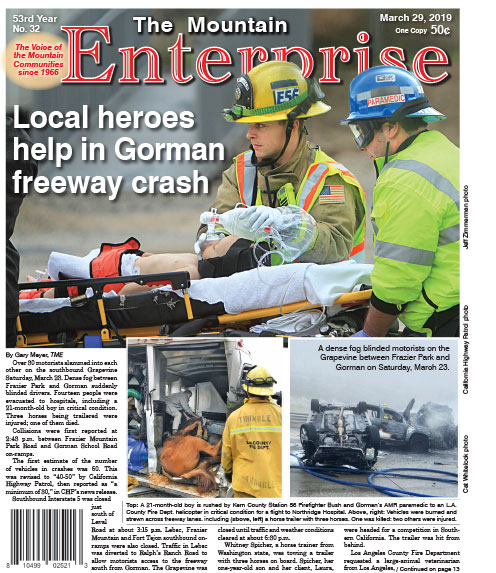