A profile in the July 10 issue of The Mountain Enterprise will introduce the new district ranger, who secured her bachelor’s degree in political science (international relations) with a master’s in homeland security—emergency management.

Gutierrez replaces Tony Martinez, who accepted the position of District Ranger on the Los Padres’ Santa Lucia Ranger District in Santa Maria after a period in Washington D.C. last year.

This is part of the July 3, 2020 online edition of The Mountain Enterprise. 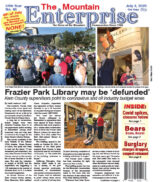