UPDATE: SCE Power Goes Out Mountainwide
Frazier Park, Lake of the Woods, Cuddy Valley, Pine Mountain  Club, CA (Saturday, Aug 3, 2019  at 4 p.m.)—Power went out through the entire region  beyond Lebec at about 1:41 p.m.  today: All along Frazier Mountain Park  Road, through Cuddy Valley and throughout Pine Mountain Club. Lebec restaurants are open and homes have power there.  Caveman Cavey’s Pizza and La Sierra Restaurant in Frazier Park did not answer their phones.

Pam Jarecki  of Lake of the Woods Mutual Water Company sent out a robocall asking residents to conserve water because there was no electricity to pump water into the storage tanks.
Everything that was not on generators at Fiesta  Days stopped running, but the the people kept visiting and having fun. All of Pine Mountain Club and Cuddy Valley that did not have autonomous solar power or generators enjoyed the cross breezes and sunshine and accepted in good spirits the failure of Southern California Edison to know what was going on with  their system—at least that is what SCE reported to the public.
At about 2:30 p.m. SCE sent out a robocall to land line and cell phones to inform customers that the power had gone out at about 1:41 p.m. and was projected to be back on at 3:30 p.,m
That hour came and went but the power did not come back on.
People returning to the mountain after being away for a few days called neighbors frantically to know whether they should throw out the food in their refrigerators.
The power outage didn’t stop the fun at Fiesta Days in Frazier Mountain Park. The Eating Contests and Family  Races continued, right on schedule.
At 6 p.m. SCE sent out another robocall, saying that power was projected to return by 10 p.m. One resident who got through on an SCE phone line reported that the service rep said, “We don’t know what it is. We have a helicopter up, trying to find the cause.”
Get The Mountain Enterprise at news stands around town to  see the Fiesta Days schedule for Saturday night and Sunday. Old-fashioned human-powered horseshoe tournaments, log sawing and arm wrestling are on the agenda. Generators are humming. Musicians are making music. Fun and food are available.
FRAZIER PARK, CA (Saturday, Aug. 3, 2019 at 3:15 p.m.)—Southern California Edison has told The Mountain Enterprise that a power outage occurring at about 1:40 p.m. has affected 4,724 customers (addresses) in the mountain communities. Power is currently expected to be restored by 3:30 p.m. Edison was unable to tell us the cause of the outage. A fire along Interstate 5 near Templin Highway occurred about 20 prior to the power outage. Edison’s representative said she was aware of the fire, but did not know of any possible relation to the outage.

This is part of the August 2, 2019 online edition of The Mountain Enterprise. 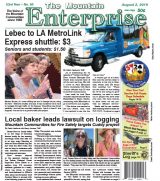 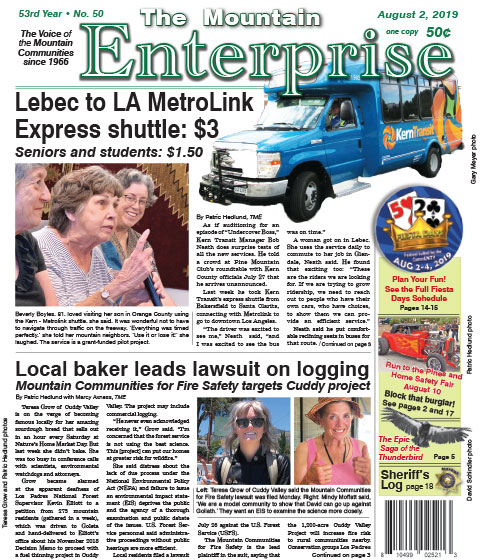