A series of promotional “concept” drawings for Tejon Mountain Village that once showed happy people frolicking around a lake with restaurants in the background were revised this month to show people surrounded by dry fields, gazing at horses on brown hills and golfers on yellowed roughs—no lake in sight. What’s up?

If such magic tricks interest you, join us for a unique dinner on Thursday, June 18 at 6:30 p.m., Cuddy Hall in Lake of the Woods. Enjoy a little flavorful fun mixed with challenging subjects, such as how to use the Tejon Mountain Village public comment period effectively.

The Mountain Enterprise invited mountain restaurants to offer free samples of their menu specialties. Doors will open promptly at 6:30 p.m. for sampling, and a brisk program with Planner Lorelei Oviatt will begin at 7 p.m.

Oviatt is Division Chief at the Kern County Planning Department. She promises to show how to use the recent draft Environmental Impact Report for Tejon Mountain Village to efficiently make comments on your special concerns, whether that is air, water, education, aesthetics, traffic, fire safety, endangered species such as the California Condor, school district boundaries, economic considerations…or more.

Two copies of the complete printed DEIR for the Mountain Communities have now been provided. One is at the public library (available during their open hours). The other is at The Mountain Enterprise office, available seven days a week during day and evening hours (call 245-3794 to say when you’d like to come).

This is part of the June 19, 2009 online edition of The Mountain Enterprise. 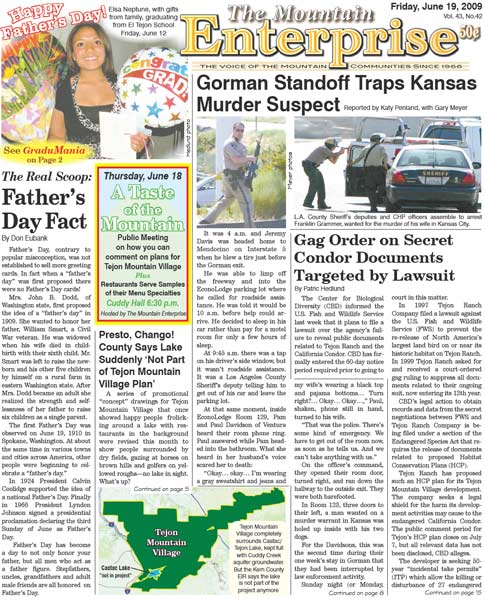