In a 3-2 vote the Kern County Planning Commission gave a green light Thursday, Sept. 10 for Tejon Mountain Village to advance to Kern County’s Board of Supervisors for approval.

After the vote, outside of the hearing room, Tejon Ranchcorp CEO Bob Stine and Center for Biological Diversity (CBD) Attorney Adam Keats shared a cordial handshake.

“Well, round one,” said Stine. “The first of many. If we live that long,” Keats replied. “I think you may have the edge on me there,” Stine chuckled.

CBD plans a long and costly court battle over the development’s impact on the critical habitat of the endangered California condor.

Tejon Ranch spokesperson Barry Zoeller said, “We are pleased with tonight’s outcome and look forward to the hearing with the Kern County Board of Supervisors.”

The hearing has been scheduled for a special session on Monday, Oct. 5 at 9 a.m. (1115 Truxtun Avenue in Bakersfield).

Opponents in the TriCounty Watchdog group said the time is a barrier to public participation and protested what they called the county’s “rush” to close off public comment on the project.

“Seems like it was specifically arranged to be inconvenient to the working people that can’t afford to take time off to protest this project,” said Toni Musulin of Torrance, who said she has been visiting the mountain area since she was a child.

Tejon Mountain Village has been a source of heated debate and anticipation for years in the Mountain Communities.

The development partners are Tejon Ranch Company (aka Tejon Ranchcorp) and DMB Associates of Scottsdale, Arizona.

The development would be built within “critical habitat” for the California condor (an area considered essential for the survival of the species) as mapped by the U.S. Fish and Wildlife Service in the 1960s.

In 1987 there were only about 22 California condors left in the world. Today, the most aggressive effort in history to save an endangered species has lifted the population to about 188 wild birds in California.

Because this was the only hearing on the commission’s agenda this evening, opponents were able to make their case with some depth.

Those who spoke in favor of Tejon Mountain Village during the hearing often mentioned financial dealings with the Tejon Ranch Company or related real estate speculation.

Ning Umandap, Vice President of Sales for Velur Enterprises, Inc. (based in Van Nuys) represents domestic and foreign investors, from the Philippines, Australia, Singapore and now China. In an interview, she said her company has invested in 20 acres of property one mile east of Tejon Ranch which will rise in value if the development is built, she said.

At the hearing, Umandap spoke in favor of the project and told the commission that Tejon Ranch’s marketing website was a great tool for selling her own offerings to her clients.

“We won!” Umandap cheered as the meeting adjourned, both fists jabbing the sky above her head.

Others who spoke in favor of the project include:

An additional mitigation was proposed and read into the record by planner Lorelei Oviatt, recommending that the forthcoming Dark Sky Society model ordinance to avoid light pollution be adopted for this project.

She also mentioned that air quality concerns had been addressed with the San Joaquin Valley Air Pollution Control District (to whom Tejon Ranch Company paid $10 million last summer to reduce emissions in the San Joaquin Valley—although no agreement was made to concentrate the funds on the Grapevine’s increasing air pollution problems).

Laer Pearce, publicist for Tejon Mountain Village, LLC, summarized the results of the hearing afterward: “There was a 3-2 vote, but those two were ‘soft no’s’. Both of them complimented the project. We are glad that the planning commission did this for us.”

A member of the TriCounty Watchdogs (a group of Mountain Community residents who criticized many aspects of the proposed project) said, “We’re all elated.” Katherine King explained, “The vote went against us, but we were thrilled that at least two of [the commissioners] listened to what we had to say.”

King had reminded commissioners of the hurdles posed by the “Ranchwide Agreement” contract announced with much fanfare at a May 2008 press conference.

Five environmental groups told of hatching an agreement with Tejon Ranch after 18 months of secret talks. TRC agreed to place a substantial number of acres into a conservancy. In exchange, the groups vowed not to join legal action to block Tejon’s development. They agreed not to appear at public hearings (such as this one) and not to speak publicly in opposition to TRC’s development plans.

King said she resigned from the Sierra Club because of this agreement. She wanted to emphasize to the commission that the conservation groups were not “given” much of the land that was purportedly conserved, but must purchase, “at fair market value appraisals,” 62,000 acres of conservation easements by 2014. She said she was worried that if the money is not raised, “in these challenging economic times,” that the land could be used for additional development.

Commissioner Belluomini asked the county planning staff to address that issue. Division Chief Lorelei Oviatt said the land is currently used primarily for grazing and that any other use would need to go through a permitting process. Belluomini voted against the project, saying he could see both sides but felt that a smaller project would be preferable.

Commissioner Perez said she loves the pristine “and unique” quality of the Mountain Communities region: “Much money has been spent to produce an eco-friendly and wise development; the applicant should be commended. My concern is the scale of the project…with hotels and spas…. It is not a plan that benefits the pre-existing communities of Lebec and Frazier Park…. It is a project that will permanently alter this natural and pristine environment that I personally love.”

Perez also said of the conflicting testimony in regard to the endangered California condor and other issues, “I’m not a scientist. I am a lawyer. Science is not perfect. I don’t want to risk this area of Kern County with a project of this size. I cannot support the project.”

The three commissioners who voted for the project disclosed in advance of the hearing that they had received visits and information from lobbyists for Tejon Mountain Village.

This is part of the September 18, 2009 online edition of The Mountain Enterprise. 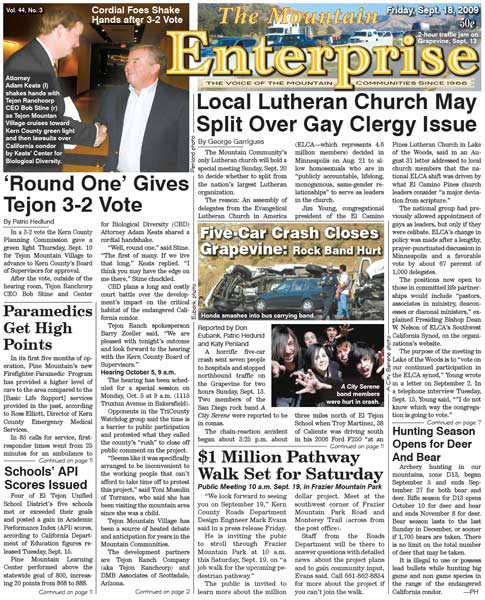