It’s hard to say what a bad week might feel like for an $11 billion corporation named by Forbes Magazine as the fastest growing technology company in America two years in a row, but First Solar Inc.’s unpleasant encounter with the Fairmont Town Council in Western Antelope Valley this week caught the eye of some Wall Street investors. The company, known as FSLR on the NASDAQ, is seeking to place a 2,100 acre, 230 megawatt system, the largest in California, in the Fairmont area.

With loan guarantees and grants, there is about $215 million in federal incentive benefit to FSLR if it can commence construction before September 30, one Wall Street analyst who contacted The Mountain Enterprise estimates. FSLR received a certification of its Environmental Impact Report (EIR) for the Antelope Valley Ranch One project in November 2010, shortly after the Fairmont Town Council was formed.

FSLR hopes to break ground by July 5, development manager Jack Pigott told about 45 Fairmont residents June 27. The group gathered at the WeeVill Market, one of the few public structures along a flat stretch of Highway 138, about 15 miles west of Lancaster.

After hearing a presentation by Pigott and Roy Skinner, First Solar permits specialist, Fairmont Town Council members and residents asked pointed questions about the transformations that will take place in their valley from the cumulative impact of 33 utility-scale renewable energy installations slated to be built in their area.

Their primary grievance, according to council president David Kerr, is the lack of consultation with the neighbors who will be most immediately affected by the facility.

Council President David Kerr said that First Solar had not notified its immediate neighbors to give them an opportunity to be part of the EIR hearing process. First Solar representatives said that L.A. County had notified neighbors in mailings. Residents ridiculed the reply, saying that rural mail addressed to street boxes is often not delivered nor received, and that none of them had received notification. Only one resident, Pat Chiodo, said he had been to an EIR hearing at Antelope Acres Town Council, about 15 miles from the Fairmont area.

Residents said it appears that L.A. County employees in Supervisor Antonovich’s office or in downtown L.A. had misinformed the solar company regarding who represents the 2,000 residents who live where the company hopes to build AV Solar Ranch One.

“We are the ones who will be paying for this project and the other ones that want to build here, with the change to our way of life,” Kerr said.

The council voted to send a letter seeking an urgent emergency meeting with the Los Angeles County Department of Regional Planning.

The letter, signed by residents as well as the council, speaks of "glaring insufficiencies" in the design and construction plans for AV Solar Ranch One.

Specific complaint was made about what was characterized as the failure of the company to make "meaningful" contact with residents. It also said the proposed project is inconsistent with the "principles and values stated in the [L.A. County] Antelope Valley Area Plan."

In strong words, the letter said that architects of the project are obliged to make a "collaborative effort" with community members, but that they had not. The council’s letter calls AV Solar Ranch One "a bullying, unwanted neighbor whose pursuit of profits apparently has blinded it to any concepts of area cooperation," then asks for an immediate review of the project "prior to commencement of construction."

Pigott said many of the concerns mentioned by residents had already been addressed in the EIR, and reminded the group that the project had already been approved by downtown L.A. He said that the Fairmont Town Council should become familiar with the EIR mitigation components before submitting the letter.

Cumulative impact issues were raised throughout the meeting. Many spoke of the 7-foot chain link fences topped with barbed wire throughout the valley around 33 projects that will turn the valley’s open landscape into a penitentiary environment.

One father said “I want to see a landscape plan to hide that fence all around the whole project. It is like living next to a correctional institution. I am for solar, but you need to come in and handle the concerns of the community. We’re no different from Napa, Sonoma and communities up north, [that have] nice pine trees [to screen solar farms]. The idea of using Joshua trees won’t work. We don’t want to look at that—and most of them die. My kids will get stuck looking at a chainlink fence desert.”

Pigott dismissed their anxiety, saying the setbacks and landscaping along paved roads for his project would be adequate. He repeated that the company adhered to the requests of L.A. County Planning Department personnel. Rural residents scoffed at the "ignorance" of urban planners regarding the needs of the rural community.

The town council voted to table “for the moment” a motion to file a restraining order that could delay the beginning of AV Solar Ranch One construction.

The next day, on Tuesday, June 28, Riverside County Supervisor John Benoit introduced a motion regarding a two percent franchise fee on another large First Solar installation planned to be built in Riverside County. According to Benoit’s press coordinator, the motion has been sent for further study by county staff. The two percent fee could total $3.5 million a year in revenues to the county, it was estimated it could mean nearly $100 million over the life of the project.

When Benoit’s proposal was mentioned at the Fairmont meeting, Pigott laughed. "We will never pay that," he said.

First Solar’s stock closed on Wednesday, June 29 at $129.42. Recent news of popular desire in Germany to close down its nuclear power plants due to safety concerns make First Solar’s thin film photovoltaic offerings hotter than ever. The company already has large solar energy installations in Germany. The day after Fairmont Town Council submitteed its letter, FSLR stock rose $4.81 per share.

Earlier in this series:

This is part of the July 01, 2011 online edition of The Mountain Enterprise. 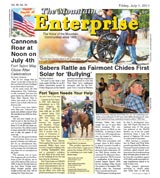 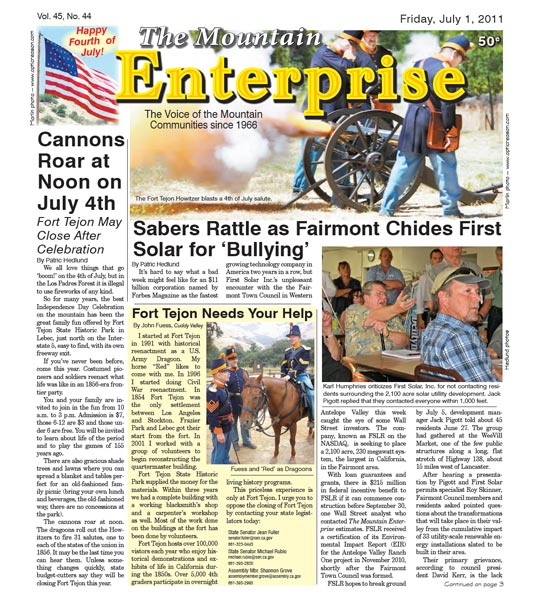