The El Tejon Unified School District Board of Trustees agenda Wednesday, Nov. 14 includes the "acceptance of a donation" of a golf cart to the district from the Associated Student Body (ASB) of Frazier Mountain High School for maintenance and athletics use."

Since last year, questions have been brought to The Mountain Enterprise by parents, teachers and students as to whether the cart was purchased with funds intended for student activities.

The purpose of ASB funds historically, according to the state Student Union association, is to develop student leadership and to promote student government, school spirit and student morale while providing opportunities for development of social and cultural interests of students.

The cash-strapped school district appears to have little extra money available for student activities. The popular high school music program was eliminated because of lack of budget. Last year students hoping to play on a JV soccer team were disappointed despite strong parent and student demand on our soccer-crazed mountain. The program was eliminated because of lack of funds, according to Athletic Director Rob Roy.

It is likely that money for the programs listed above come from funds separate from ASB, but the examples illustrate that lack of student activity funding has had an impact on student social and cultural life.

Included in the ETUSD board’s packet of documentation as we go to press are two unsigned letters, one dated November 9, 2007 from ASB executive president Mitchell Bates, which says that the ASB Class of 2007-08 "is proud to donate a golf cart for athletics and maintenance use. It has served its purpose this year numerous times, especially at home football games where transporting injured players has been a necessity." Calls to Bates have not yet been returned.

There have been five home football games this year. An ambulance service is contracted to stand by at such games in case of injury.

The other unsigned letter is on the letterhead of Superintendent Shelly Mason, dated November 14, 2007 and addressed to the ASB, saying "thank you for your generous donation… used for athletic activities and by the Maintenance Department at FMHS."

Athletic Director Rob Roy, who has been driving the cart at home games since 2006, is also the ASB advisor.

He confirmed in a phone interview that the cart was purchased last year for around $4,300. He said he did not have time to discuss how the ASB leadership made the decision to spend their budget for a maintenance/ athletics cart. Whether there is a conflict of interest in being the Athletic Director and ASB Advisor receiving funds for such a purpose is still a question worth asking…and worth answering.

This is part of the November 16, 2007 online edition of The Mountain Enterprise. 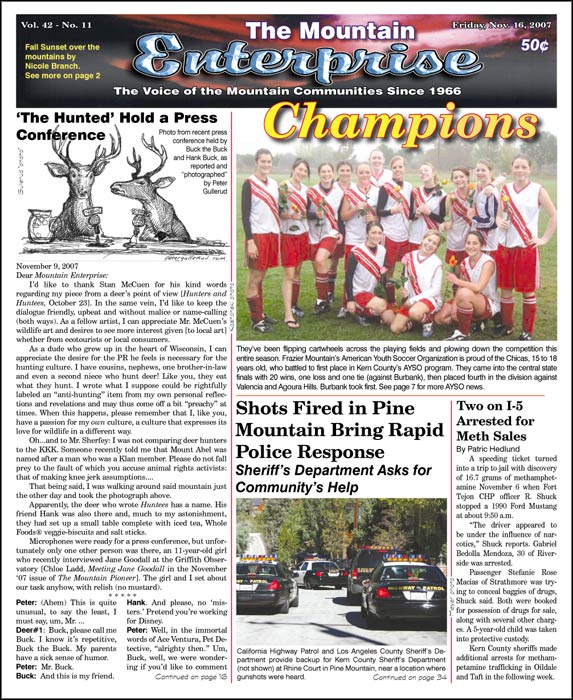