UPDATE: Pine Mountain Club, CA (Thursday,  July 11, 2019 at 6 p.m.)—Laemon Harris, wanted for an assortment of warrants, including felony first degree burglary and theft for crimes allegedly committed in Pine Mountain Club is now being held with a $75,000 bail. His next hearing is scheduled for July 22 at 9 a.m. in Superior Court (1415 Truxtun Avenue in Bakersfield, Div. PH).

UPDATE: Pine Mountain Club, CA (Thursday,  July 11, 2019 at 3 p.m.)—Kern  County Sheriff’s Office officially announced this afternoon that Laemon Harmon was wanted “for two active felony arrest warrants, with one stemming from his connection to numerous burglaries and thefts committed within the Frazier Park and Pine Mountain Club area which resulted in thousands of dollars in losses to multiple victims. Harmon is believed to have been acting with an accomplice in these crimes, Rosheba Fennell.”

In their letter, the Kern County Sheriff’s Office said it is requesting the assistance of the community in locating Rosheba Fennell, who also has active felony arrest warrants for burglary, vehicle theft, and resisting arrest. Anyone with information regarding Fennell’s location is urged to contact Senior Deputy James Simmons of the Frazier Park Substation at (661)245-3440, or the Kern County Sheriff’s Office at (661)861-3110. Anonymous callers can call the Secret Witness program at (661) 322-4040.

UPDATE: Pine Mountain Club, CA (Thursday, July 11, 2019 at 11 a.m.)—Leamon Harmon, 52 was booked Monday, July 9 at 11:25 p.m. on a first degree burglary warrant, a felony. No bail amount is listed for that charge. He is also booked for violation of terms for post-release supervision, another felony. It appears from court records that Harmon served 10 years incarcerated for continuous sexual molestation of a child on a 2008 conviction as a  sex offender. He was released in 2018. A warrant was issued for his failure to comply with terms of supervision. A $25,000 bail has been placed on that charge. Court records list another $10,000 in bail for an “open charges” arrest.

Harmon’s name has become famous locally as one of the faces on the Wanted poster issued in regard to the crime wave of more than 30 burglaries committed in the past eight months in Pine Mountain Club.

Sgt. Ashley said Kern County Sheriff’s deputies are seeking to interview Harmon. Multiple felony warrants have been issued for him.

This is part of the July 12, 2019 online edition of The Mountain Enterprise. 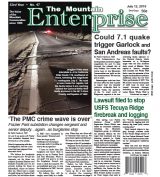 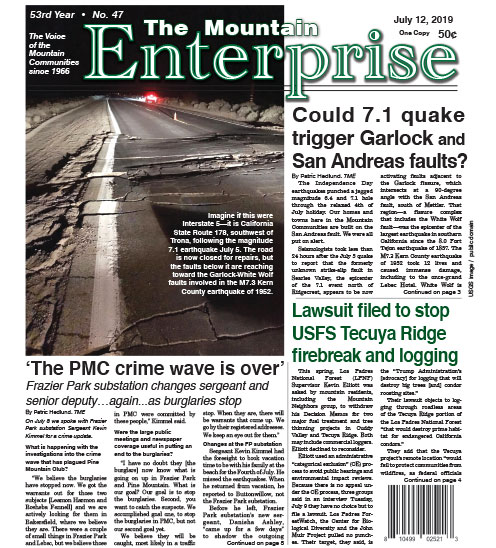