The scene of a rollover accident on northbound Interstate 5, north of Templin Highway, in which a Ventura County Search and Rescue team member who was assisting at the scene was struck and killed. Another was critically injured. There was total of 10 injuries.

Intrestate 5, The Grapevine near Templin Hwy./Vista Del Lago (February 2, 2019 at 2 p.m.)— Amid the rainfall and wind, the California Highway Patrol reports rain caused a debris flow that washed boulders and rocks onto northbound Interstate 5 approaching the Grapevine. Ventura County Fillmore Search and Rescue Team member Jeff Dye was helping people at a traffic roll-over when he was struck and killed by another vehicle at about 7:30 a.m. on northbound I-5.

The SAR team, on a training mission, stopped to help the vehicle that had rolled over when the second vehicle went out of control on the freeway and crashed into the rescuers. Two other SAR team members were injured, one of them critically, the other with minor injuries. Seven other people were involved in the crash that occurred near Pyramid Lake during the heavy rainstorm. Please read the note below, about the hazard of speed and hydroplaning in a rainstorm like today’s. We will see more rain and snow this weekend and into the week. The forecast is also below.

INTERSTATE 5 (The Grapevine) near Templin Hwy./Vista Del Lago (February 2, 2019 at 10:16 a.m.)—Motorists driving too fast are crashing and rolling over on Interstate 5 south of Gorman. In separate incidents, a vehicle has gone over the side, several others have rolled over coming to rest in the middle of freeway lanes and on the shoulder of the roadway, one on its roof, another on its side. [Public Safety message from The Mountain Enterprise] The best way to avoid these crashes is to slow down. With so much water on the surface of the road, hydroplaning is a constant danger. Hydroplaning occurs when your tires float on top of the water and lose contact with the road surface. This is caused by driving at a speed that is too fast for the road conditions. For many vehicles, 65 MPH is too fast when there is a quarter or half inch of water on top of the road surface. Slow down and Arrive Alive.

INTERSTATE 5, near Grapevine (February 2, 2019 at 9:34 a.m.)—Traffic is flowing on I-5. The accident is in the median between NB and SB at this time.
INTERSTATE 5, near Grapevine (February 2, 2019 at 9:14 a.m.)—Most recent report from Neenach photographer Jeff Zimmerman on NB Interstate 5 north of Templin Highway, south of Vista del Lago: “10 patients, 1 fatality;  Ventura County Search and Rescue personnel have been injured, Los Angeles County Fire Department personnel have been injured.”

INTERSTATE 5, near Grapevine (February 2, 2019 at 8:40 a.m.)— In the midst of heavy rain and ferocious wind gusts up to 85 miles per hour, The Mountain Enterprise has an unconfirmed report of an accident on Interstate-5  near Vista Del Lago involving CHP officers, sheriffs, several critical patients, and possible CHP officer in cardiac arrest. We will update as soon as additional confirmed information is available.

This is part of the February 1, 2019 online edition of The Mountain Enterprise. 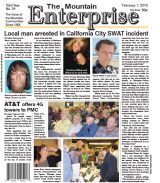 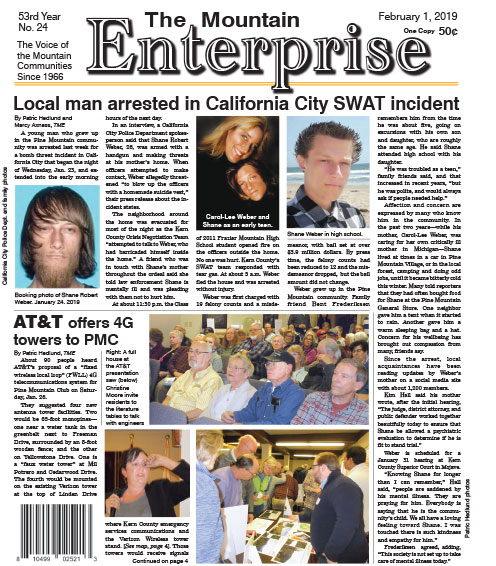