In the First Annual Center of the World Festival, the subject of peaceful conflict resolution was handled in many different ways to create a series of interesting 10-minute plays. The festival was conceived as a national competition for playwrights, followed by readers’ theater presentations of the top ten entries. The audience voted for the winner, who wins a $500 prize.

This was a worthwhile festival that shed valuable light on what conflict resolution means. While doing that, the festival producers created something that will be a real contribution to the future of the Mountain Communities.

A standing room only crowd attended the opening ceremonies with Chumash storytelling and music.

I was pleased overall with the quality of the plays we saw on Saturday. There were three really good and tight plays in the mix that deserved and received recognition.

I voted for God and Satan by Barbara Ladin, which is the one that won. It was simple, direct, tight—and funny.

Weighing In by Rachel York- Bridgers was quite remarkable, about a woman in New Orleans after Katrina trying to get her daughter into a charter school. The daughter was denied entry. The mother is African American. When she confronts the director of the school, the woman says she used to be morbidly obese, so knows the sting of discrimination. The women instantly liked each other and they mutually understood each other’s point of view. It was a real lesson in empathy.

Readers’ theater can be hard to pull off. I think the short end of the stick went to Lonon Smith. His was the most crafted play, but more complex, and needed staging to be fully understood.

Next year, with the Shakespeare Festival in July, we can really help promote the C.O.W. Festival in August.

Now that I understand what it is, we can really get behind it. This is a very worthwhile event.

—from interview with P. Hedlund

See photos in Center of the World Festival Wins Fans.

This is part of the August 21, 2009 online edition of The Mountain Enterprise. 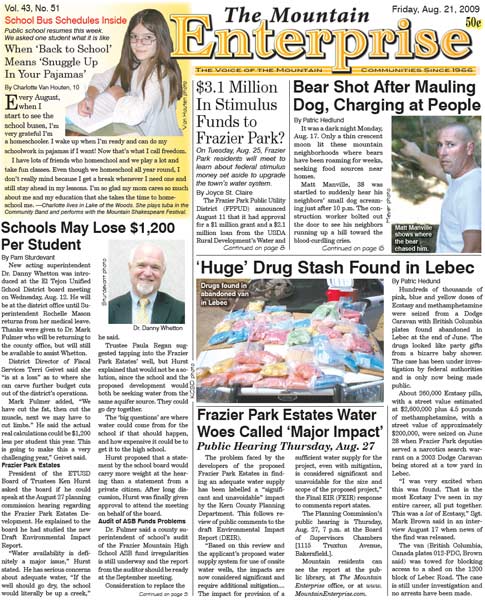