From that spot, the world unfolds below in an endless expanse. To stand there is to feel as if you can fly. High at the top of San Emigdio Mountain, overlooking a horizon stretching forever into the San Joaquin Valley below, the kids were giddy, playing games, making jokes, kicking rocks. Then the unthinkable happened. Michael slipped.

Michael Manning would have celebrated his 16th birthday on Tuesday, April 28. On Monday, April 20, Michael and four friends—one a college student, the others all underclassmen at Frazier Mountain High School—started celebrating early.

Shortly after 7 p.m., the Pine Mountain youth fell more than 700 feet down the steep cliff at the northern face of San Emigdio Mountain.

The firefighter team with a paramedic rushed to the scene. Paramedic Dave Whitman descended the mountain. He radioed up that the youth was unconscious but had a weak pulse.

With the paramedic at his side, the young man passed away shortly after. Then the paramedic became stranded on the face of the cliff with the youth’s body.

By 10:20 p.m. Southern Kern Search and Rescue had assembled on the mountain. They deployed a team to help retrieve the FMHS student’s body and to assist the paramedic. Hall ambulance personnel were standing by to assist anyone who might be hurt in this effort.

Fire crews spent several hours rigging trees with ropes and pulleys in order to free the paramedic from the steep ravine. At approximately 11 p.m. Whitman was finally to secure, uninjured and able to walk to the top of the mountain.

But the treacherously steep terrain hampered efforts throughout Monday night to retrieve the body. Search and Rescue command was concerned that attempts during the night would imperil other rescue workers. A firm wind rising up the north face of San Emigdio Mountain posed a problem for a helicopter, especially in the darkness of night, causing county sheriff’s officials to postpone the recovery until daylight for the safety of personnel

In the morning, Kern County Sheriff’s Search and Rescue team members brought the victim’s body to just below the top of the mountain where family members were waiting with Pastor Roger Reece. After about 10 minutes, the body was brought up to the coroner’s van where television news crews were waiting.

The gate to the San Emigdio road is typically closed through the winter, it had only recently been re-opened by the U.S. Forest Service.

“The edge just draws you in, it mesmerizes you,” a family friend who asked not to be named said of the sheer escarpment that plunges from the ledge of the lookout spot, which is often high above the valley’s clouds.

At FMHS a plan to provide support for grief-stricken students was developed. El Tejon Unified School District Superintendent Shelly Mason confirmed that counselors were on duty in the FMHS library to talk with students and to provide grief counseling. Students are writing messages to express condolences to the youth’s parents and working together to plan a memorial in his honor, Mason said.

“The edge just draws you in, it mesmerizes you.” —Comment by parent about San Emigdio cliff face

This is part of the April 24, 2009 online edition of The Mountain Enterprise. 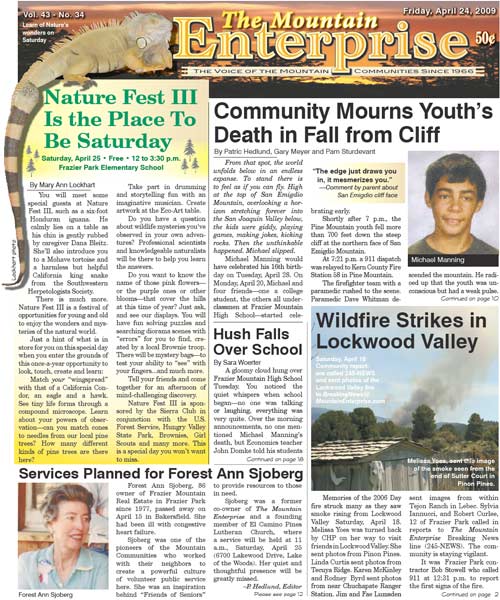