FRAZIER PARK, CA (Tuesday, Nov. 10 at 8:41 a.m.)— The accident was reported at 7:12 a.m., according to CHP Officer Adriaan Garcia. Ice had formed on the bridge about a half mile west of Monterey Trail and vehicles were losing traction there this morning. The fatal crash victim is a Frazier Park resident, a “young man,” Garcia said. We will report his name after his family has been notified. He was driving a 1989 Chevy Blazer, painted a beige or pale yellow color. At the scene, Kern County Fire Department Captain Riley of Lebec Station 56 said he and his crew saw one other spun-out vehicle upon arrival and while they were investigating the rollover they heard several other vehicles skidding after crossing the bridge. The eastbound driver appeared to have lost control at the bridge, spun out, rolled over and gone off the north side of Frazier Mountain Park Road. Officer Garcia indicated that the driver may have been going too fast for the road conditions.

At about 7:50 a.m., as our reporter was entering the accident scene, another rollover with a possible pin-in was reported on Mil Potrero Highway, just west of the “Y” near the abandoned camp. That reported vehicle turned out to be abandoned by its driver and was in the process of being towed away.

FRAZIER PARK, CA (Tuesday, Nov. 10 at 7:30 a.m.)— A fatal accident on Frazier Mountain Park Road near Monterey Trail has been reported by tipster Linda Curtis. We are checking on the details. Motorists are warned that very cold temperatures overnight have led to icy roads, including dangerous black ice patches.

Please drive slowly and be extra cautious this morning on mountain roads.

This is part of the November 6, 2015 online edition of The Mountain Enterprise. 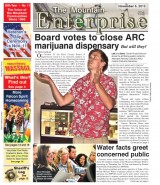 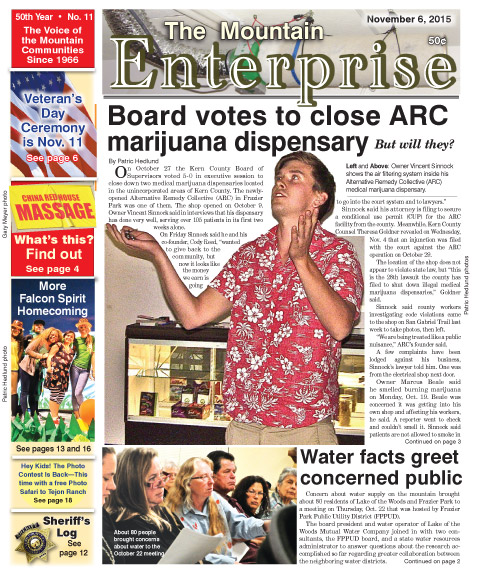