The bright lights of worldwide media were focused on the unveiling Thursday, May 8 of a secret deal that will shape the future of this entire mountain region and a substantial part of California. (See map of the Tejon Ranch Conservation and Land Use Plan)

After two years of secrecy, word spread quickly of the conservation deal between Tejon Ranch Company (TRC) and some of the largest Big Green organizations in the United States to save 240,000 of TRC’s 270,000 acres as contiguous wildlife habitat.

‘The Ranch’ flew in the ultimate celebrity visitor—movie star and governor in one package—Arnold Schwarzenegger, to congratulate Tejon’s CEO Bob Stine alongside those who had joined in the negotiations on behalf of the state and environmental groups.

By Tuesday morning, TRC shareholders reading the New York Times’ editorial on the subject received an almost breathy and vaguely naive glimpse at the significance of the deal ["Saving Tejon Ranch"] in comparison to more nuanced analyses from the Los Angeles Times ["Tejon Ranch pact would allow 26,000 homes on the range"] and local mountain pundits who are aware that there is a long road yet ahead—both to bring the proposed conservation structure into reality and to see TRC implement its development goals.

But there is no doubt that the legal obstacle course for TRC appears to have cleared significantly. The Sierra Club, Audubon California, the Planning and Conservation League, the Endangered Habitats League, the Resources Opportunity Group and the Conservation Biology Institute were on the podium for the announcement, shoulder to shoulder with Schwarzenegger and Stine.

The agreement requires that none of these groups appear in court or in any other proceedings to argue against TRC’s developments.

Plans for the 23,000-home Centennial project in northern Los Angeles County and Kern County’s Tejon Mountain Village in Lebec (an anticipated 3,400 multimillion dollar ranchettes with resort hotels clustered around Castac Lake) must still go through the state’s CEQA procedure and county planning department gauntlets. Additional development at the base of the Grapevine around the Tejon Industrial Complex is also expected, and comment from the green groups will be prohibited as the company moves through entitlement toward full buildout of 30,000 acres (which actually incorporates 33,000 more acres called "open space" adjacent to the three large development areas).

The deal itself has not yet been published in its entirety, although maps are becoming available. "The finishing touches are still being put on the agreement…to finalize a signature copy…," TRC Vice President of Corporate Communications Barry Zoeller said Wednesday, May 14. He said it is about 120 pages long and that attorneys for all sides expect that it will be done in about two weeks.

At the moment, there is notable ambiguity in the terms which have been released. Fracture lines developed within the Sierra Club chapters from Los Angeles through Kern County over continuing directives from its attorney for members to maintain secrets—even on the subjects they are being asked to keep quiet about.

Bill Corcoran, senior regional representative in the Los Angeles Field Office of the Sierra Club—one of the parties to the negotiations—attributes the discord to overzealous "legalese" on the part of the group’s attorney in his emails to members telling them not to discuss the issues.

But ecological Biologist Lynn Stafford resigned as a member of the executive committee for the Condor Group of the Sierra Club (based in Pine Mountain) almost three weeks before the announcement. "I was in a ‘second tier’ of people consulted on some aspects of the agreement, and just became uncomfortable with the secrecy," he said.

UCLA Statistician Jan de Leeuw of Cuddy Valley resigned from the governing board of the Kern-Kaweah chapter of the Sierra Club a week before the May 8 event to protest the parent group’s decision not to consult with local members who are most knowledgeable about this region and will be most affected by the accord and the developments Tejon plans to build.

Zoeller says, "Once that final document is signed…It will definitely be public." The agreement will be posted online through the Securities and Exchange Commission’s EDGAR site.

Meanwhile, preliminary analysis shows that TRC will offer options to buy easements for five separate areas, for which the option period will expire in 2010. At the press conference it was suggested that these options might be acquired using state funds, with a state approved appraisal.

Additional easements are to be acquired over 30 years, as TRC gets its development permits. Unhappy members of the Sierra Club say "that is a long time to stay quiet."

"I am very concerned that this agreement says nothing about sprawl," Mary Ann Lockhart of the Condor Group said. The Condor Group met Monday to decide whether to disband. They decided to continue as a local branch of the Sierra Club and to continue their activities that are unrelated to Tejon Ranch. No details are available yet as to how they can speak about cumulative impact concerns.

Within hours of that meeting, de Leeuw sent out an email announcing that another group, the TriCounty Watchdogs, "welcomes activists from the Sierra Club and is willing to reconstitute itself as a larger group. It remains committed to opposing developments that negatively impact our communities, and that take more than they give." He added that "TriCounty Watchdogs is also committed to environmentally sensible projects that enhance economic opportunities on the mountain."

De Leeuw wrote: "We will seek alliances with outside environmental groups and individuals that share our goals." He said they would be announcing meetings soon.

See map of the Tejon Ranch Conservation and Land Use Plan

This is part of the May 16, 2008 online edition of The Mountain Enterprise. 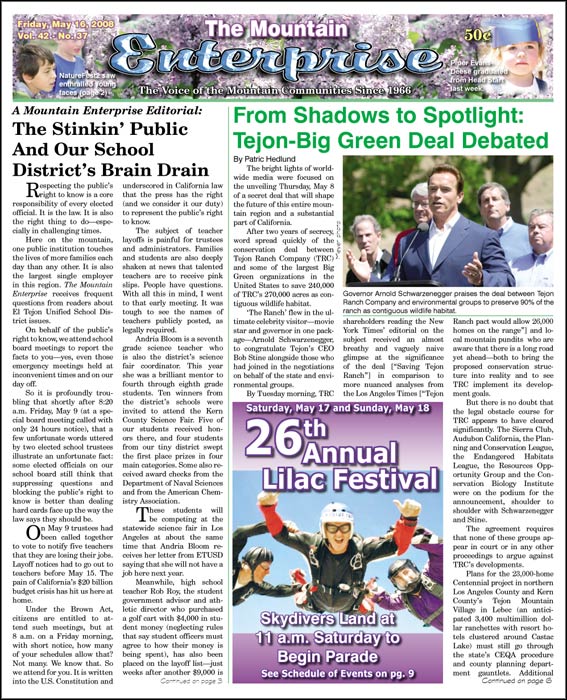