Lloyd Wiens died last week. His good friend James Halfhill died just five months earlier. Both were passionately dedicated to the future of these mountains, and to a true legacy of wild nature and the dignity of history that is not frayed and twisted by marketing slogans and branding campaigns. In those ways, perhaps some would call them romantics.

But Wiens was also an entrepreneur and Halfhill was a pragmatist. Wiens earned a realtor’s license a couple of years ago, owned sporting goods businesses and always had ideas crackling in the back of his mind about how to make a paying business from living zestfully among the mountains he loved.

Halfhill, an avid runner who ran between Pinon Pines and Lake of the Woods daily, also managed Chevron gas stations in Lebec and Castaic. Both considered themselves politically conservative. They weren’t slick. They lived as libertarian truth-seekers, investigating relentlessly to understand how to pierce the mist of irrational myth and webs of political favors being spun by the aggressive development projects proposed for the Interstate 5 corridor.

Bottom line: Wiens and Halfhill lived here and they died here. Both died in the midst of fighting passionately for the future of these mountains, for a healthy future where the wildlife, the soaring California condor and those who love learning from wild nature can thrive.

That doesn’t mean that either man was "anti-development." It means that they were in favor of all-cards-on-the-table fair play when it comes to due process and public policy about cutting up the wilderness.

They complained about the long history of tactical litigation waged by Tejon Ranch Company’s legal teams to suppress information about the recovery of the California condor.

Despite Tejon’s grand announcement and PR blitz this August, the information is still being held back from public access until all public comment periods through both the federal and state hearings related to the development of Tejon Mountain Village are closed.

Halfhill wrote a eulogy for California condor AC8, the 57-year-old matriarch who was shot by a pig hunter in February 2003 under supervision of Tejon Ranch’s commercial hunting program.

Halfhill was distressed that the U.S. Fish and Wildlife Service did not hold Tejon accountable for that killing. Many believe that bodes ill for the notion of a "50-year nonlethal take permit" for the condor under Tejon’s development plans.

Wiens wrote this editor that he appreciated the questions we were asking about the actual, operational meaning of a term such as "nonlethal" when condor are already dying on Tejon and adjacent lands from proximity with humans even before wholesale development begins.

Fact is, Wiens was an often angry philosopher, irritated by the schism between style and substance, form and content, epitomized by Barry Zoeller’s slick marketing campaign for the "Tejon Brand."

Never mind that it is a fiction that this is a "local company." Wiens bought Tejon stock himself, he said, but knew that most of it belongs to Wall Street speculators plucking profit from this region as if it were a third world country.

He scoffed at the clothing line, designer shirts, gift baskets, private label wine and tchotchkes lavished upon politicians and littering half the desktops of Kern County department heads, not to mention the blitz of lobbying visits to members of the Kern County Board of Supervisors by the entire executive staff of the ranch and Tejon Mountain Village, from Roberta Marshall, Joe Drew, Bob Stine to Zoeller.

Wiens chafed at the $20,000 paid to Governor Arnold Schwarzenegger days after the governator helicoptered in to make the press conference to reveal the bargain with five conservation groups (including Audobon, Sierra Club and the Natural Resources Defense Council) that agreed to provide cover for all the politicians intent on providing a green light for Tejon’s developments, by consenting to a gag clause, agreeing not to litigate or even speak out about the impact of the proposed developments on traffic, air pollution, water supplies, or habitat degradation for endangered species, including the California condor.

I don’t know if either Lloyd Wiens or James Halfhill played poker. I don’t know if they would have had admiration for the way Tejon has played its hand, including the convenient fact that the much-flaunted Tejon Ranch Conservation and Land Use Agreement appears to have served to remove one of the thorniest political problems Tejon faced as developers: objections by the United States Navy about proposed development under the flight path for experimental and training aircraft flying out of the Edwards Air Force Base/China Lake area. The "conserved" lands create a convenient corridor for aircraft to continue to fly unhindered, without conflict with or danger to resort tourists and million dollar vacation homes.

Meanwhile, Kern County is nearly frothing with excitement that they will finally be receiving a revenue cut from I-5 development which heretofore seemed to primarily fill L.A. County’s pockets.

Next Monday, the most important public hearing perhaps to ever occur in this area is likely to determine the future of these mountains that Halfhill and Wiens dedicated themselves to preserving. Somehow, I imagine both of them will be there in Bakersfield at 9 a.m. Monday, Oct. 5 (1115 Truxtun Avenue, first floor), in ringside seats.

This is part of the October 02, 2009 online edition of The Mountain Enterprise. 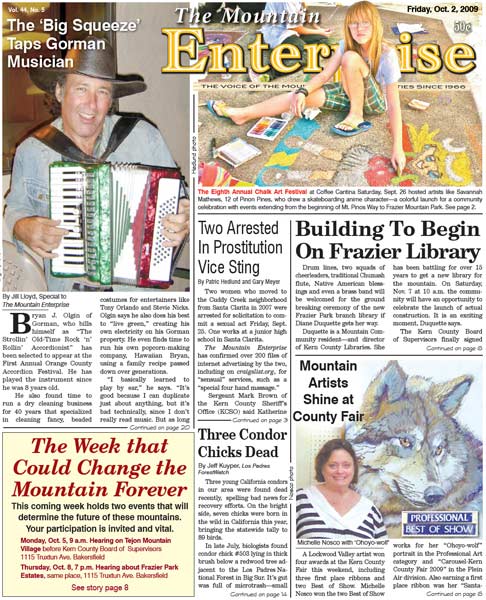